A new local restaurant opened up close to our neighborhood and of course we just had to go try it out. Of the meals we ordered, only one stood out and that was gnocchi with braised beef. It was love at first bite and I immediately was like, “I need to somehow make a Chirpy version of this”.

A few days later, Cody and I were in the kitchen doing some testing for a low-carb cauliflower gnocchi. And boy was it successful! Not that I’m extremely difficult to please when it comes to food, but still. Our Cauliflower Gnocchi with Bacon Cream Sauce was born. Here, I have to admit that it’s not exactly our usual “quick, simple and easy” recipe. It’s still quick, simple and easy, but not to the degree of the usual recipes found here. It takes some effort to make the cauliflower gnocchi, but it sure pays off. I should probably clarify that I use the term “gnocchi” very loosely here, as this is obviously very far from what gnocchi actually is. That’s the beauty of food, though- it’s almost like art and can be interpreted in any way.
This is an extremely basic recipe for Cauliflower Gnocchi – pretty much just cauliflower and egg pureed until it’s super smooth, formed into gnocchi shapes, and sautéed. That gives it a slightly crisp outside and a fluffy pillowy inside. The Bacon Cream sauce is quick and easy, and really complements the gnocchi. 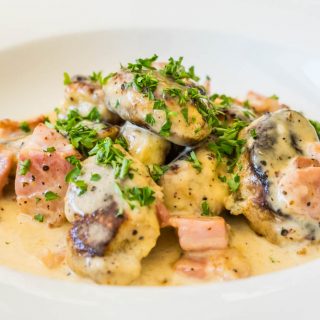 Here's How To Become A Better Home CookLearn to "SALT TO TASTE" and more. Read NOW!
Tried this recipe?Mention @LivingChirpy or tag #livingchirpy!