What Is Japanese Clear Onion Soup?

Firstly, what does Clear Soup mean?

A clear soup is as the name suggests, a richly flavored clear liquid broth that can be made from any meats, vegetables, herbs, spices and flavorings. It has to be strained at the end, because a strict definition of “clear soup” means that no solid parts can be present in the soup.

Japanese Clear Onion Soup specifically is a very light, clear soup made from a meat or vegetable broth with a strong onion flavor. It is simmered for 30 minutes to unlock the flavors and then strained to achieve a clear and flavorful onion soup.

It is a very common and very popular soup served at Japanese Restaurants, and is a staple on any Hibachi Steakhouse menu.

What Is Japanese Clear Onion Soup Made Of?

Japanese Clear Onion Soup is a light, but delicious soup. The ingredients are simple and easy to find:

Is This Popular Hibachi Soup Healthy?

As you can see, it is a very simple clear soup recipe – as is most clear soup variations. This means that it is not extremely nutritionally substantial and is very low in calories, but that’s exactly what makes it perfect as a light starter.

With only 64 calories per serving, it is the epitome of light!

Some people do enjoy adding shredded chicken and have it for a light meal that is very low calories. This is quite delicious and perfect for weight loss, but then not exactly a Japanese Clear Onion Soup anymore.

For other yummy (and healthy) soup recipes, check out any of these options from our archives, as well as some of our personal favorites from other great bloggers.

Did You Make This Japanese Clear Onion Soup Recipe?

If you’ve made this Japanese Clear Soup recipe, please leave a comment and a rating. We love hearing your feedback and it greatly helps us improve our recipes! 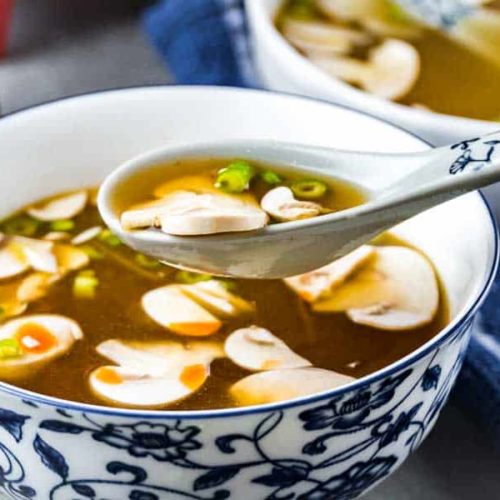 Here’s How To Become A Better Home CookLearn to "SALT TO TASTE" and more. Read NOW!

This Japanese Clear Onion Soup Recipe was first published on September 17, 2015 and updated on February 20, 2020 to include detailed step-by-step instructions and faqs.